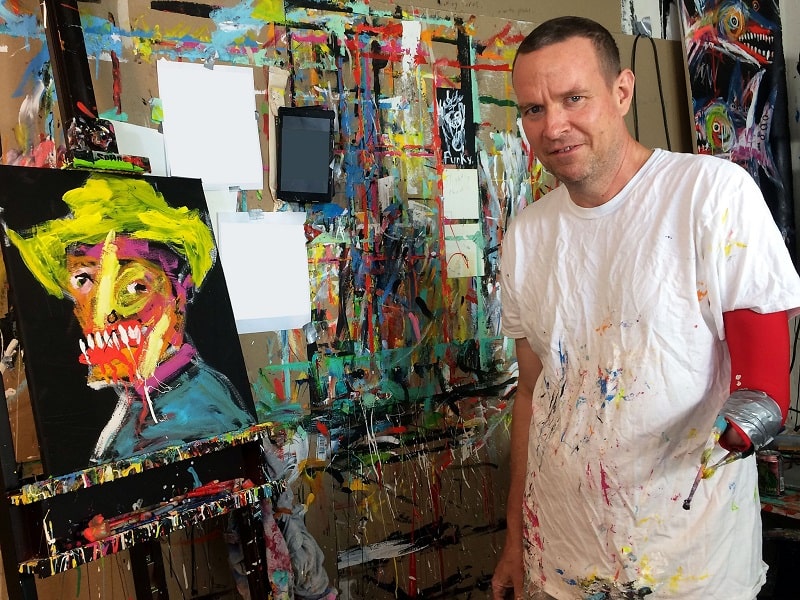 What is art? A vast question that still raises many questions today. The answer is not self-evident and the meaning evolves over time and civilizations.

There are as many definitions of art as there are artists and art lovers in the world, but it is reasonable to agree that art always causes a change – small or large, personal or universal. It is the very purpose of art to provoke a sensation.

Art is a human activity, the product of that activity or the idea one has of it deliberately addressing the senses, emotions, intuitions and intellect. It can be said that art is the proper of Man, and that this activity has no definite practical function. We consider the term “art” as opposed to nature “conceived as a power producing without reflection” and science “conceived as pure knowledge independent of applications”.

The writer Claude Roy sums up this pluralism of the notion of art as follows: “The notion of art, whether it is a matter of
Negro art, Cretan art or impressionist art, remains at the same time imprecise, ineffable and irritating. Art is what keeps the dead idol alive as an idol. Art is what in an object continues to serve when it is no longer useful.

The history of art can be divided into five main historical periods:

Prehistory extends from the birth of the Homo genus to the discovery of writing in 3500 BC. It is the birth of the first human works considered as art: paintings, sculptures and cave ornaments. Among the most beautiful examples still visible today are the paintings in the caves of Lascaux or the megalithic alignments of Carnac.

Antiquity began with the discovery of writing and ended with the fall of the Roman Empire in 476. Artistic practices then differed between different civilizations: Egypt, Greece, Etruria, Rome, Near East, Celtic World, Pre-Colombian Civilization, Indian Subcontinent. It is a prosperous period where ceramic work, sculpture and architecture predominate. It is also during this period that writing takes all its importance and that poetry and philosophy develop.

The Middle Ages began in 476 and ended in the 15th century with the Great Discoveries. It is a period when the majority of art is in the religious domain. Churches proliferate. Of modest size in the Romanesque era, they are transformed into majestic cathedrals with the architectural progress of Gothic art.

Last historical period, in which we still find ourselves, the contemporary era that began after the 2nd World War. Artistic currents proliferate at a time when art is very often a reflection of society.

The term Contemporary Art refers to the artistic practice practiced since 1945. It is therefore a historical period and not an artistic movement. The history of art situates this period as the successor to Modern Art (1900 -1945). The expression “Contemporary Art” has imposed itself since the 1980s when the public authorities began to promote and support contemporary creation.

Previously, art concerned a circle of initiates; with the emergence of the mass media the knowledge of works and artists spread to become part of our daily landscape. As Andy Warhol expressed it, art has become an industry, a “factory”.

Contemporary Art is therefore characterized by several aesthetic styles and practices that are specific to artists. The incredible diversity of its forms and styles is confusing. Freed from its role of mimicry by the invention of photography as well as from moral and social constraints, Contemporary Art invents practices, explores new territories or reinvents already proven formulas.

The reproduction of reality no longer being a goal, the notions of beautiful and ugly, good and bad taste are put to the test. For in reality, one of the major characteristics of Contemporary Art is the abundant questioning it provokes. It is not satisfied with an aesthetic approach of reproduction but questions the spectator.

The different movements of Contemporary Art

Street Art or Urban Art is a free art practiced in the streets. It is an autonomous artistic movement even parallel to tag and graffiti. Its initiators are Daniel Buren, Ernest Pignon-Ernest, its pioneers Blek le Rat, Jérôme Mesnager. It was born in the 60s in New York. In France, it flourishes mainly since May 1968. Allan Kaprow, one of the first artists to use installations, writes that “Art has moved from the specialized object in the gallery to the real urban environment”.

While there are immediate visual similarities with graffiti, the message is quite different. It is an art that aims to communicate a message, be it political, social or other. Street ArtActually, artists want to be subversive, they want to provoke and represent what people are thinking downright, that’s what is behind this trend. The street is the widest and most powerful place for the purpose of visibility.

This type of art is seen in a multitude of forms and styles throughout cities. Street artists use aerosol, stencil, stickers, cut-outs, paintings, photography, mosaics, and even produce video projections. The different impressions and creative ideas make their way through the city and then make their way to the public. They are not just graffiti on city walls, they are rich and varied projects that transform streets and public places into real art galleries.

Abstract Expressionism was born in the aftermath of World War II. It was the first specifically American artistic movement to exert international influence, putting New York City at the center of the Western art world, a role that had previously been held by Paris.

It was born as a reaction to conformism and the country’s post-World War II situation. The economy, after years of crisis, is recovering and American art represents a real cultural force. Abstract expressionism is apolitical, avant-garde, and wishes to unite the whole society.

The works are very varied and the main theme is the inner world where color takes all its meaning, true subject and matter as such on huge canvases that mark the author of the work as much as the observer.

Influenced by surrealism, the theories of the subconscious and Kandisky’s abstraction, the movement really appears at a publicly funded exhibition in New York in 1948. It brought together many artists from New York, which was called the “New York School”. These artists used very large canvases where the paint is spread over the entire surface. The brushstrokes are superimposed one on top of the other, to the point of gradually erasing them to give this almost uniform aspect, where the movement seems to continue beyond the edges of the canvas.

Abstract ExpressionismAction painting, as its name suggests, is characterized by the action that the painter puts into his brush with which he violently projects the paint onto the canvas. The gestures are fast, instinctive, even spontaneous. The only real actor of this movement is Jackson Pollock. De Kooning, who is not part of this movement, and Kline also use the technique of “dripping”, which describes the flow of paint. Paint is here matter, as well as its color.

Colorfield painting is only attached to color and not to movement. Rothko is the initiator with his canvases in which are arranged very rich and luminous flat areas of color. Other painters like Newman will also practice colorfield painting.

The new realism, as a movement, was a leading current on the post-war French artistic scene, and focused on a decade that saw the formation of the group and the expression of collective action. This period, extremely dense and lively, is quickly followed by the affirmation of personal journeys.

From the end of the fifties to the mid-sixties, this movement was part of a general trend of renewal of artistic languages (new novel, new wave, neo-dada, etc….) deeply linked to the evolution of the post-war world. Society was then marked by the growing affirmation of the American cultural model. From an artistic point of view, New York became, after Paris, the new world artistic center. From an economic point of view, the spectacular growth of industrial production led to the birth of a triumphant consumer society that profoundly transformed the face of daily life (advertising aesthetics, the overabundance of images, proliferation of new materials).

Historically, the movement was born on October 27, 1960, with the Constitutive Declaration of the New Realism, orchestrated by the critic Restany. The latter thus brought together under this same banner the artists whose work, according to him, was based on “new approaches and perspectives on reality”. However, the signatories of this declaration, Klein, Raysse, Arman, Dufrêne, Villeglé, Hains, Spoerri, Tinguely and Restany himself, to whom were added in 1961 Deschamps, Niki de Saint-Phalle, Rotella and Christo, were essentially characterized by the justified claim of a “collective singularity”.

New RealismBaptized in a voluntarist manner by the art critic, the representatives of New Realism can be recognized above all by their general attitude of appropriation of the real, described by Restany as “poetic recycling of the urban, industrial, advertising real. They thus integrate elements of the everyday world into their works: fences, barrels, plastic objects, garbage, cars or traffic signs?